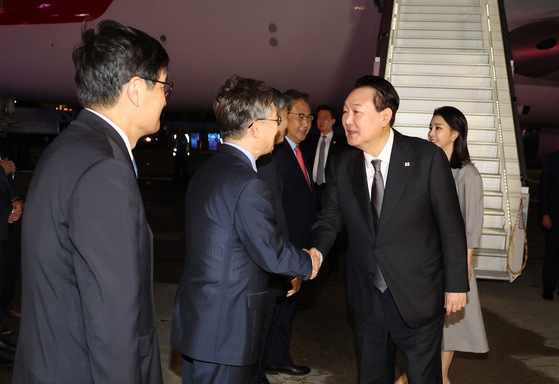 President Yoon Suk-yeol arrived in New York on Monday, kicking off the second leg of a three-country tour after concluding a visit to London, where he attended the funeral of Queen Elizabeth II.

Yoon was scheduled to deliver his first speech to the UN General Assembly on Tuesday, and also hold a summit with US President Joe Biden and some sort of meeting with Japanese Prime Minister Fumio Kishida.

“President Yoon Suk-yeol’s message will be a call for solidarity from countries that share the value of freedom at the UN,” National Security Adviser Kim Sung-han told reporters in New York on Monday. “In other words, a win-win situation can only be achieved when countries with economic and technological capability actively help those countries that don’t.”

The theme of the 77th session of the General Assembly is “A Turning Point: Transformative Solutions to Interlocking Challenges”.

Kim said the theme of this year’s session was “finding transformative solutions to complex challenges,” noting that “the Covid-19 pandemic, climate change, food security, energy security and war are all intertwined.”

In his 15-minute speech, Yoon is also said to highlight that South Korea, once a country with a per capita income of less than $100, has become a top 10 economic powerhouse “because the countries of the free world, including of the United States believed in and actively helped Korea,” Kim said.

Ahead of their second summit, Biden and Yoon chatted briefly at a reception hosted by King Charles III in London on Sunday and said they look forward to seeing them again in New York soon.

In talks with Biden, Yoon could voice Seoul’s concerns about the US Inflation Reduction Act (IRA) and opportunities for coordination on North Korea’s nuclear issue.

If Yoon and Kishida have a summit, it could be an opportunity for them to try to mend torn ties, though Seoul and Tokyo often bicker to the last minute over the format and agenda of such meetings of leaders.

The two sides are struggling to resolve historic disputes arising from Japan’s 1910-45 colonial rule, including the issue of compensation for forced labor victims during World War II, but Yoon has been pushing for better relations, and the US is encouraging an expanded trilateral Cooperation.

On Wednesday, Yoon will attend a reception hosted by Biden at the American Museum of Natural History.

Earlier Monday, Yoon and First Lady Kim attended the Queen’s state funeral at Westminster Abbey, which was seated near other world leaders including French President Emmanuel Macron and Biden.

Yoon wrote in a book of condolences for the Queen: “I pray for the soul of the late Queen Elizabeth II and offer my deepest condolences to the British royal family and people.”

He was able to sign the book of condolences on Monday after being unable to make it to Westminster Hall, where the Queen was lying in state, on Sunday due to heavy traffic.

The president’s office on Tuesday dismissed concerns that there had been problems with diplomatic protocol, stressing that Yoon’s schedule would be carried out “in coordination with the royal family.”

Yoon shares the grief of the British people and offers his condolences with the “highest courtesy,” the Presidential Office said in a statement.

The trip to London “served as an opportunity to further solidify the basis of friendly relations between Korea and the UK and strengthen solidarity with countries that share the core values ​​of liberal democracy,” she added.

As his last assignment in London, Yoon bestowed the Order of Civil Merit on Victor Swift, an 88-year-old British veteran of the 1950-53 Korean War and head of the British Korean War Veterans Association.

The final leg of Yoon’s week-long trip includes a stop in Toronto on Thursday to meet with artificial intelligence experts and Korean residents, and a summit with Canadian Prime Minister Justin Trudeau in Ottawa on Friday.