They have been demonstrating across the country for days. Determined, angry and above all brave. Women in Iran are at the forefront of the current protests.

That’s not new. Women have played key roles in all protest movements over the past 40 years, including the Green Movement of 2009 and the last major nationwide protests in November 2019, which lasted for several weeks before being brutally crushed.

Immediately after the Islamic Revolution in 1979, women demonstrated loudly against the headscarf requirement introduced with the new Islamic constitution. They were unsuccessful and had to submit to the Islamic dress code. Compliance has since been enforced by Iran’s so-called Morality Police.

Daily struggle for skin and hair

But the women continued to fight for every inch of skin and hair on a daily basis. Irrespective of all the arrests and humiliations, the headscarves slipped further and further back over the years, the clothes became tighter, the faces heavier made-up, in short: women became more visible again. 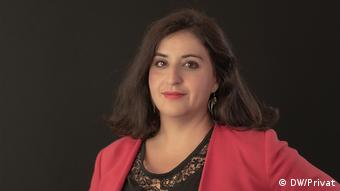 Yalda Zarbakhch is the head of DW’s Persian service

This minimal right to self-determination is an achievement of Iranian women – and a threat to Islamic rulers. Because it challenges something on which the entire system of the Islamic Republic is based: control over the female body.

Even innocent young women like the completely apolitical Mahsa Amini seem to frighten the vice squad. This is one of the reasons why the outrage at the death of the 22-year-old unites people from all walks of life who have very different views. She has become a symbol of the protest movement. Everyone can identify with her, because that could have happened to any other woman; There is hardly a woman in Iran who has not had a humiliating and violent encounter with the vice squad.

But the scenes we see this time are quite new in form. Women protest without a headscarf or burn their headscarves in public. They demonstratively cut their hair and shout “Down with the Islamic Republic” or “Death to the dictator!”

The anger and determination of the demonstrators is greater than in the protests of previous years. They confront the security forces and sometimes even manage to drive off the police who attack them. The people of Iran have less and less to lose. In 2009, the protests were more about freedom and reform – within the system. In 2018-19 they were a reaction to the grim economy, runaway inflation and skyrocketing gas prices. Even then, some slogans were directed against the clerical leadership and the Islamic Republic.

But what we are seeing now has a whole new dimension. Demonstrators tear down posters of the revolutionary leaders Khamenei and Khomeini, burn them and loudly demand the overthrow of the entire political system. More and more people have turned their backs on the regime, its ideology and even Islam altogether. And that is now even true for people from more traditional walks of life.

The regime strikes back

According to initial reports, the regime in Tehran has already severely restricted Internet access. The experience of the last major wave of protests in 2019 shows us that this does not bode well. At that time, too, the Internet was suppressed and sometimes completely switched off.

A brutal crackdown on the demonstrators was initiated to the exclusion of the international public. Hundreds of people are believed to have been shot dead and countless others arrested.

Even now such actions are threatened again. More than 20 people, including children and young people, have already been killed. Demonstrators are beaten and arrested in their homes.

There is a compelling reason for the mullahs’ crackdown. This is a turning point for Iranian civilians. For the first time, protesters openly and collectively denounce a religious symbol of the Islamic Republic. The veiling of women is one of their most important bases. The rulers cannot and do not want to make any concessions – because the abolition of the headscarf requirement would be the beginning of the end of the Islamic Republic.

But if the West and the international community don’t put pressure on the Iranian government, it will ultimately have a free hand to brutally and bloodily suppress these protests as well. Mere expressions of solidarity will not suffice. Even if it comes to reviving the nuclear deal issue, Iran must be held accountable on these issues.

The United States is leading the way. It has already sanctioned the vice squad. The federal government is also obliged to do this.

The people of Iran – especially women – are currently taking a great risk. We must recognize their courage. Their voices need to be heard. And the risk must pay off.

This article was translated from German.