In a rapidly evolving industry like digital advertising, new technology-based innovations and trends continue to gain traction with the emergence of new platforms. For example, the rise in content creation, Google’s decision to move its use of third-party cookie data, and ads appearing on Netflix. However, one constant that will remain is the increased need for media quality metrics.

As digital marketers seek to optimize their digital campaigns to get the most value from their ad spend, it’s vital for them to stay ahead of the unpredictability of digital media. Integral Advertising Science‘s (IAS) recently published 17th edition of our Media Quality Report offers transparency on the performance and quality of digital media in the Asia-Pacific region, in addition to global comparisons. This report examines how media quality has evolved over the past six months and how marketers can leverage these changes to maximize future campaign performance. The report provides detailed insights into metrics such as viewability, ad conversion, brand risk, time-in-view, and ad fraud; However, I would like to elaborate on the importance of visibility and how trends in it have changed over the past six months.

Ask a marketer what the first metric they use to measure their ad is. The answer is visibility 9 times out of 10. Viewability has long been a key performance indicator for advertising campaigns in digital environments. It’s safe to say that visibility’s simplicity makes it easy for marketers to understand, enable, and set custom standards. After all, no advertiser wants to pay for ads that don’t get a chance to be seen by a human. As ad buyers continue to weed out impressions that aren’t viewable, global viewability rates have skyrocketed, increasing by as much as 15 points in some formats between 2019 and 2022.

Also Read :  Social media firms brace for mayhem as US midterms near

In the first half of 2022, only mobile web display ads globally had an average viewability of less than 70%. Video ads in mobile environments achieved viewability rates of over 80% during this period. 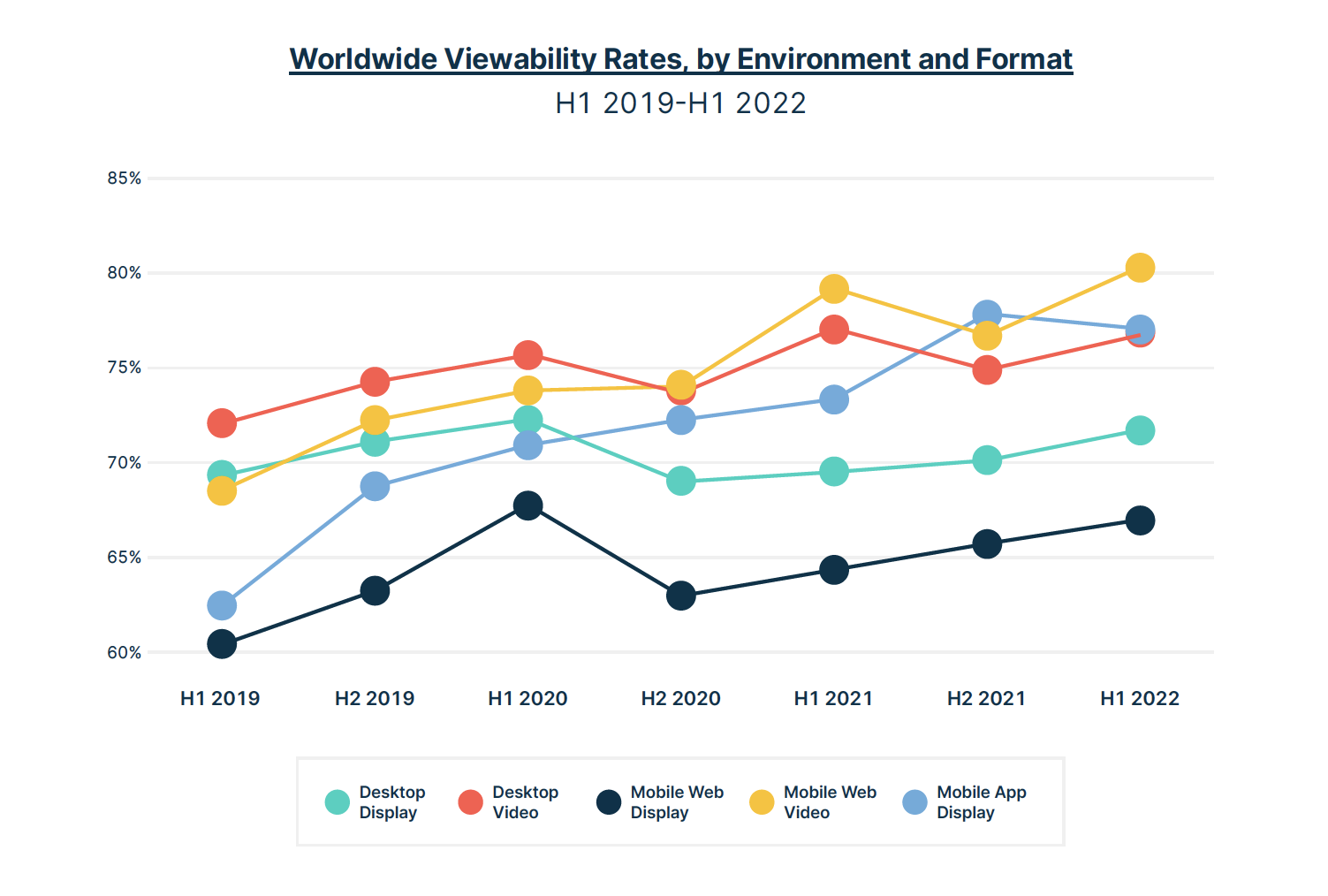 With the exception of Japan, all APAC markets saw increases in viewability in viewing environments, with Australia recording the highest level of viewability at 74.6%, a 2.9 percentage point increase year-on-year. Japan reported the lowest desktop display viewability at 48.4% compared to the world average of 71.5%. The other APAC markets reported viewability rates in excess of 60%. While this is only one side of the story, we also need to look at ad completion and time-in-view to fully understand how much importance we should place on viewability.

In Australia, ad completion rates for desktop video and mobile web video started strong in the 1st quartile but gradually declined through the 4th quartile.

Notably, ad completion rates in Australia for desktop video and mobile web video were higher than the global average in all four quartiles. This means Australian marketers did a good job of connecting with their consumers, resulting in the audience seeing more of the ad than the rest of the world. However, if you look at the time-in-view (TIV) metric for desktop viewing and mobile web viewing, Australia noticed a year-on-year decline in numbers and was below the global average. Stay with me here for a moment, this will get more interesting. On desktop display, with the exception of India and New Zealand, other Asia-Pacific countries such as Indonesia, Japan, Australia, Vietnam and Singapore all saw year-on-year declines in TIV and reported numbers lower than in H1 2022 global average of 21.79 seconds Interestingly, when viewing mobile apps, only New Zealand and Vietnam were below the global TIV average of 17.75 seconds; all other Asia-Pacific countries performed better than the global average.

Australia, Indonesia, Singapore and Vietnam surpassed the 65% viewability in the mobile app display.

From this mixed collection of results, we can see that viewability is a metric that comes with its own set of challenges. Recent findings from the IAS Insights As A Service (IAAS) team suggest that there comes a point where the return on viewability diminishes: while targeting higher viewability with pre-bid segments results in higher-quality impressions marketers risk compromising scaling.

The experiment showed that reach was highest for pre-bid segments targeting viewability rates between 40% and 50%, with significant but limited reductions in reach up to ≥ 60% viewability. If the segment optimization was set to 70% viewability and higher before bidding, a 41% loss of reach followed.

Additionally, an offer that qualified for pre-bid segments with higher visibility performed better, but only up to a point. Impressions targeting the ≥70% viewability segment had no impact on conversion rates compared to rates ≥60%, but increased cost-per-conversion (CPC) by 10% and reduced reach.

The IAAS team concluded that targeting the ≥60% pre-bid viewability segment appears to be the sweet spot to maximize conversions, maintain a competitive CPC, and minimize the impact on scaling.