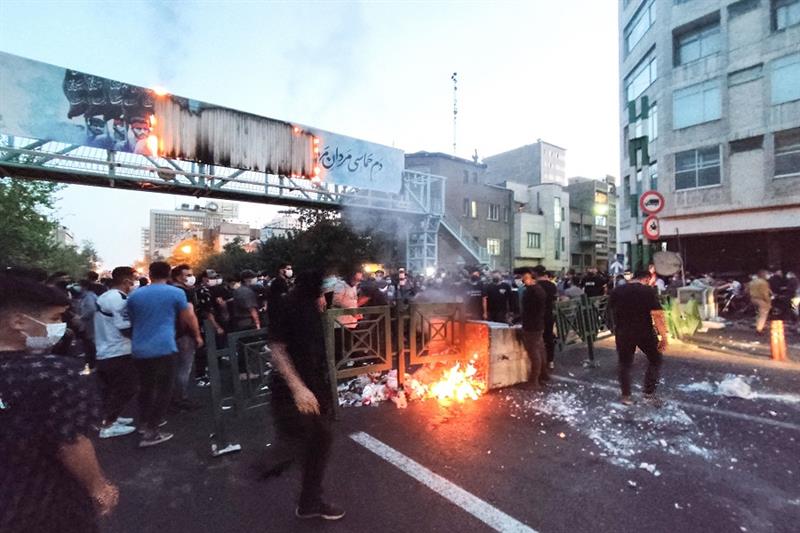 Iranian protesters burn a trash can in the capital Tehran during a protest for Mahsa Amini September 21, 2022, days after she died in police custody. AFP

Public anger has flared in the Islamic Republic since authorities announced on Friday the death of 22-year-old Mahsa Amini, who was arrested for allegedly wearing a hijab headscarf in an “inappropriate” way.

Activists said the woman, whose Kurdish first name is Jhina, suffered a fatal blow to the head, a claim disputed by officials who have announced an investigation.

According to video footage circulating on social media, for six straight nights of protest, some women protesters have defiantly removed their headscarves and burned them in bonfires or symbolically cut their hair in front of cheering crowds.

“No to the headscarf, no to the turban, yes to freedom and equality!” Protesters in Tehran could be heard at a rally echoed by solidarity protests abroad.

International concern over Iran’s crackdown on the protests has mounted, including from US President Joe Biden in an address to the United Nations.

“Today we stand with the brave citizens and brave women of Iran who are demonstrating right now to secure their basic rights,” Biden told the General Assembly on Wednesday.

He referred to the deaths of indigenous women in Canada, as well as Israeli actions in the Palestinian territories and the “brutality” by the group “Islamic State” against women from religious minorities.

“As long as we have this double standard where attention is focused on one side and not all equally, we will not have true justice and fairness,” Raisi said.

Iranian state media reported that street rallies had spread to 15 cities by Wednesday, with police using tear gas and making arrests to disperse crowds of up to 1,000 people.

In southern Iran, video footage allegedly from Wednesday showed protesters setting fire to a giant picture on the side of a building of General Qassem Soleimani, the revered commander of the Revolutionary Guards who was killed in a US attack in Iraq in 2020 .

“Death to the dictator” and “Woman, life, freedom” could be heard from protesters shouting in video footage that spread beyond Iran, despite online restrictions first reported by internet access monitor Netblocks.

“Following an official decision, access to Instagram in Iran has not been possible since yesterday (Wednesday) evening and access to WhatsApp is also disrupted,” reported the semi-official Fars news agency.

“Shock” for the regime

On Thursday, Iranian media said that three militiamen “mobilized to deal with rioters” were stabbed or shot dead in northwest Tabriz, central Qazvin and northeast Mashhad.

A fourth member of the security forces died in the southern city of Shiraz, Iranian news outlets reported, adding that a protester was stabbed to death in Qazvin, adding to six protester deaths previously announced by officials.

But there were fears the death toll could rise as Norway-based Kurdish rights group Hengaw also reported the deaths of two protesters, aged 16 and 23, in west Azerbaijan province on Wednesday.

The Iranian authorities have denied any involvement in the deaths of protesters.

Amnesty International said it had registered the deaths of eight people – six men, a woman and a child – four of whom were shot dead with metal bullets by security forces at point-blank range.

The London-based human rights group condemned the UN for giving Raisi a platform, saying it showed “the repeated failures” of the international community to be accountable.

British Foreign Secretary James Cleverly told AFP that “Iran’s leaders should realize that the people are unhappy with the direction they have taken”.

French President Emmanuel Macron said he asked Raisi to show “respect for women’s rights” at a meeting on Tuesday.

The protests are among the heaviest in Iran since the November 2019 riots over rising fuel prices.

The outpouring of unrest over Amini’s death “is a very big shock, it’s a social crisis,” said Iran expert David Rigoulet-Roze of France’s Institute for International and Strategic Affairs.